Last year, we helped write a paper about the future of global governance.1

As we researched and brainstormed ideas for that paper, we found ourselves continually confronted with a deceptively simple question: Why don’t the countries of the world cooperate more?

On topics as wide-ranging as trade, war, and climate change, it’s evident that humanity could achieve better results if countries “could just work together!”

Unfortunately, none of these problems are as simple as they first appear (as most of our readers probably know). Negotiations stall out for many reasons. In a future post, we hope to explore some of these reasons in much more detail. For the topic at hand, it’s sufficient to note that as you increase the number of nations that need to agree on something, the less likely that agreement becomes – or the more conservative your proposal must become in order to reach agreement.

Considering this, we realized that this challenge could be framed as a trade-off between depth of coordination (i.e. how much independence each player has to give up) and breadth of coordination (i.e. how many players need to work together). When illustrated, this trade-off is strongly reminiscent of the production possibility frontier in economics, which illustrates the total amount of a product that can be produced given a set of resources.

Thus, we termed our idea the cooperation possibility frontier.

Illustrated below is an example of the cooperation possibility frontier. On the horizontal axis is the breadth of coordination – the proportion of all actors that must cooperate in order to achieve something. As we go from left to right on the horizontal axis, coordination problems require an increasing percentage of actors to cooperate. At the lower extreme, best-shot problems require only one actor to take (effective) action. At the upper extreme, weakest-link risks require the cooperation of all actors.

On the vertical axis is the depth of coordination. Deep coordination can present many challenges, including monetary cost, reduced independence of action, and the many costs, delays and frustrations associated with a framework for coordination (e.g., communication channels, procedures, etc.). Since our example is the global cooperation possibility frontier and we’re therefore focusing on the coordination of nation-states, the vertical axis is thus strongly related to the amount of sovereignty that must be ceded by nations in order to solve a particular problem. 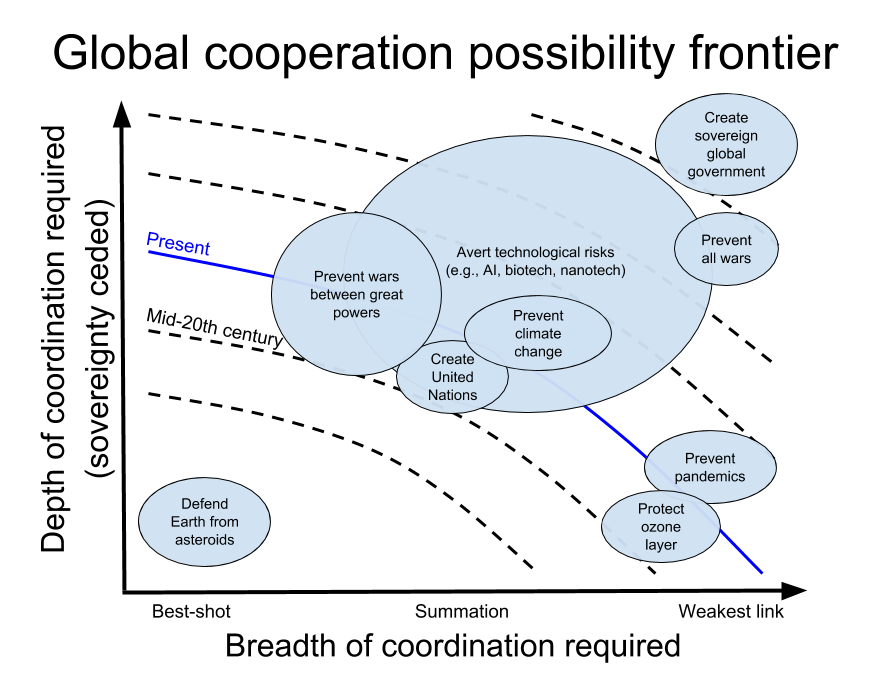 On the plot, we’ve also illustrated several salient global coordination problems that we believe provide some insight into the dynamics of coordination. They include:

We’ve found that the global cooperation possibility frontier is a useful tool for achieving coherent discussions about global risks and global coordination challenges. In Ruling Ourselves, we deeply explore one question based on this analysis: How can the global cooperation possibility frontier be expanded? To that end, we explore what factors seem to be hampering the expansion of the frontier today and how various actors in the world can act throughout the coming years and decades to deliberately expand the frontier so that humanity will be better positioned to face the coordination challenges of tomorrow. The full work goes into detail on the opportunities for transformative work in these areas:

Other questions can and should be asked. Here are a few that have occurred to us:

To close, we’d like to reiterate that this idea (and illustrative plot) is the core of our answer to the question “Why don’t the countries of the world cooperate more?” In brief, cooperation becomes more difficult as you increase the number of players and the costs of cooperation rise. We hope that these insights will help guide future strategy on global coordination challenges – a topic we hope will receive much more attention.